Suffolk is in the news for the most curious of reasons. [For the ITV news item take a look here] The gist of the story is that Condiment working with Visit Suffolk have come up with the title The Curious County as part of a campaign to attract visitors to the county.  When I first heard about it over the weekend I liked the idea, Suffolk is so much more than Beach Huts, Tractor boys, bucolic scenery and Newmarket racing (not that there is anything wrong with any of those) ~ but you do have to lift up the rug to find what’s under there.  As the battle between the reported views of the MPs ‘Dangerous – got to go – negative, idiotic’ and a significant chunk of the twitter community who are #proudtobecurious I was getting ready to pen a letter to the EADT, the MPs or some other body. Then I decided don’t shout, show.  So if you click the picture above or below it will take you to my particular take on Suffolk The Curious County, an ever growing Pinterest board of the things I find make me curious in Suffolk.

What would you add?

We have a little tradition round here, a group of friends take it in turns to host a supper when it is one of the group’s big ‘O’ birthday.  This was my chance; ever one to set myself a challenge, I decided to try to source all the ingredients from Suffolk.  This is how the meal went, there is a Spotify playlist to go with the post; it was Earth Day too, so celebrating all good things around us seemed particularly appropriate.

The opening gambit from two of the friends when they arrived was, ‘so are we going to have road kill?’ – Little did they know.

Being fabulous people the first thing they asked was, “is there anything we can do?” – I explained that the one product I couldn’t buy locally was Suffolk butter. I poured some cream into a jam jar and asked them to shake it whilst they talked.  Passing the jar from one to another; we could eat once when we had produced butter.

The Lane Farm meats are dry and not overly fatty so really tasty to eat, especially with something a little spicy like a mustard or the peppercorn dressing.  The Pinney’s smoked fish is delicious.  The fish is soft and delicately smoked, not overly flavoured.  The Road Kill rolls were bread rolls shaped like flattened hedgehogs.  Kelsale flour is not bleached, so even their white flour comes up as a brownish roll, perfect for hedgehogs.  The flour has a gloriously silky feel when you work with it.  I was caught out though by using too much water in the initial mix, so much kneading on a well and frequently floured board was required to bring it back to a good consistency.  I proved the dough over night and did a secondary shaping and proving in the morning.

Another time I would make the rolls smaller, they did look rather intimidating.

Amuse-bouche:  Weed shot.  I made a soup using, Jack-by-the-hedge, cleavers (aka sticky willy), nettles, chick weed, sorrel and land cress from the garden and the lane.  I served the soup by giving everyone a shot glass and pouring the soup chilled from a White’s pear juice bottle.  Variously described as disgusting, smelling like drains and quite nice; I think it is possibly an acquired taste.  I’ll drink the rest for lunch, I guess it will have cleaned the palate if nothing else.

Venus and the Hunter’s return: The main course was a variation on coq-au-vin.  Made with chicken breast, Shawsgate Venus, onions, carrots, potatoes, a good bundle of fresh herbs as a bouquet garni and some chopped pickled walnuts (walnuts from one of the friend’s garden) stirred into the sauce.  I was trying to keep this course low fat, so didn’t thicken it with a roux and used skinless breasts, the little oil I used to soften the onions was local rape seed oil from Hillfarm.  With hindsight this may have been a mistake, the chicken came up rather dry and I wish the potatoes had a bit of a crispy edge to them.  Another time I think I would use a deep casserole, slice the potatoes and do as a layered topping.  The chicken, potatoes and carrots are all from local suppliers and bought at auction at Abbots at Campsea Ashe.  As there were already some veg in the casserole I just served it with a huge deep dish of Birds Eye peas.  Now I can’t guarantee these were from Suffolk but there is a fair to middling chance they were; but equally that they may be the last ones we see.  I have previously written about the pea harvest in this area; what I didn’t know at the time was that just before this year’s crop should have been planted, Birdseye would pull the plug and not renew the contract. Some of the farmers will have planted beans or other replacement crops, but various contractors have been laid off and had to find new work, all at very short notice.

Cheese: I served, Suffolk Gold, Suffolk Blue from Suffolk Farmhouse Cheeses, Creeting St Mary, and Shipcord, Hawkston from Rodwell Farm in Baylham near Ipswich.  Trying to avoid biscuits, I served them with spiced pickled pears that I made last year and some spiced peaches from Laxfield that I won in a WI draw.

At this point a friend that I knew was going to be late arrived.  It was agreed that she should try the weed shot before being allowed to proceed, she correctly identified nettles as an ingredient. 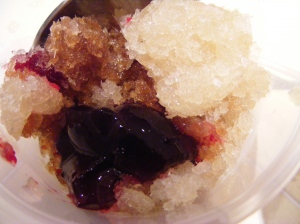 Heston vs Delia Desert: I am not a great lover of puddings and often pass on them preferring to tuck into cheese instead; so deserts with me are always a bit of a risk.  I gave each person a small plastic tub and a pipette.  The idea was to build your own desert taking as many (Heston) or few risks (Delia) as you like from the following list.

Throughout the meal the drinks on offer were Shawsgate Baccus 2004 and a selection of juices from Whites.

The meal was finished off with a gorgeous cake that one of the friends had made, fizz from another friend and there should have been tea and coffee but I think by then I had forgotten that bit – oops.

I am hugely grateful to Eat Anglia, who when I was having problems getting the Kelsale flour called and asked them to deliver some for me especially, that’s service.

The topic for this week’s Illustration Friday is music; currently my head is a jumble of music. I have been trying to learn the cornet, you should be very grateful at this point that I live in a field a long way from anyone. I have not played any instrument since recorders at primary school, so although I can read the basic notes that is my limit. Also I rediscovered the karaoke machine and we only have a couple of discs to go in it; not sure that Atomic Kitten or the cast of Les Misérables and Chicago would be flattered by my attempts; perhaps this would be more appropriate. I have also become a huge fan of Spotify I love running word searches based on a theme and seeing what tracks come together. Here is a link based on children and need for Children in Need, be aware though, not all tracks are radio edits and there may be some strong language.