Pop Up Pie Seller – Brays Cottage – Somewhere Over the Rainbow*

I have had great fun with the North Folk today.  Sarah @Brays_Cottage Pettegree pushed out a tweet a few days ago asking for help on the Bray’s Cottage Pie Stall in Norwich today.  It may have been a damp and blustery city centre, requiring massive amounts of tea and coffee to be consumed, but it was a great way to spend the morning. 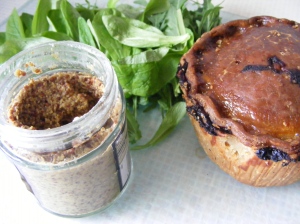 The smell of the pies was gorgeous, Sarah claims she is immune to the aroma but by the time the shift was over there was only one thing to do…… chase a la Pietalian Job back own the A140 and tuck into the salary.  The pies were of the Onion Marmalade persuasion; other pies on offer today included naked, chilli and lemon with garlic.  Despite the suggestions of @deanrnch the urge to eat was great, no heating or mashed potatoes took part in the meal; just pork pie, mustard with lamb’s lettuce and rocket from the greenhouse.  The pies are dark, dense, rich, with no extraneous jelly and the pastry had taken on the flavour of the onion marmalade.  The meat has a good level of herb and spice seasoning without being over powered.  It was great to meet Twitterers face-to-face and to gain some new friends among the North Folk.  Thank you Sarah for a memorable morning out; I will think of you on sunny days, with the chat and comradeship of the others in the market and on cold days I will think of you standing on layers of cardboard wrapped up against the elements – true dedication to your pies. If ever you are stuck again you know where to find your pop up pie seller; somewhere over the rainbow.

p.s.  also picked up asparagus on one of the other stalls, so that’s supper sorted.

*actually you don’t have to weigh the pies on the stall but it is my second favourite joke after the one about the duck.

A little recipe invented the other evening. First take one butternut squash, wash the exterior, cut into wedges and cut out the seeds but do not peel. Heat a roasting pan to moderately high approx 180c in my oven. Once hot, pour in some olive oil – I used lemon olive oil, toss the squash wedges well to ensure well coated add some ground black pepper. Rinse some preserved ie salted lemon in fresh water and cut into pieces, add to the dish and put into the oven to cook until the squash is nice and soft to the touch and slightly caramelised. If your lemon starts to catch or scorch add some water to the bottom of the dish for the remainder of the cooking time. Eat as an accompaniment to meats or as a main course vegetarian dish, any leftovers are great added to couscous for salad the next day with a little more oil if required.