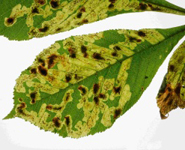 A quick post to urge you to join in the Bristol University Chestnut leaf miner survey.  This study is hoping to capture the current state of chestnut trees across the country.  You simply download an app to your mobile phone; photograph leaves, tag for location and upload.  Full information here: http://www.bristol.ac.uk/news/2011/7744.html

The iphone version of the app is here: http://itunes.apple.com/gb/app/conker-tree-science-leaf-watch/id445371129?mt=8

Last Night I dreamed of Chickens, but ate duck…

A lot to pack into one post: Illustration Friday, Janathon and Suffolk 365 including a mini restaurant review, iPhone app review and a local music link; but I’ll be swift.

The topic for Illustration Friday this week is ‘chicken’.  I found a poem by Jack Prelutsky called Last Night I Dreamed of Chickens, follow the link the poem is quite cutesy.

As for Janathon – today I went and did session 7 of my plan.  I had managed to miss it unintentionally so for the Stats: 1,000m done as 5×40 warm up 15×40 (every third set with pull buoy) at speed and 5×40 cool down.  I was the only person in the pool for most of my session so no need to negotiate swimming sides rather than loops in the lanes.

Last night I was lucky enough to get a visa to travel over the border to Norfolk.  There is a great town called Diss, one town – so many puns.  There is a little secret in Diss called the Singtong, it is only open in the evenings and Fri and Sat lunch.  As a welcome change from standard Hong Kong Chinese food the Thai style menu is a bit different.  Not sure if it still acts as a coffee-house during the day, it used to.  It is on the first floor and has the air of going to your aunties for supper, small friendly and family run.

Today’s Suffolk 365 picture is a bit of a cheat really.  I found myself listening to twitter on the radio.  Well specifically started with Radio 4 listening to @hen4 who was on Open Country, talking about her yurt and tree growing on Exmoor. Then via Twitter I discovered that @theprofithunter was on Radio Suffolk.  I tried to find it on iPlayer on the iPhone and it appears that Suffolk doesn’t exist – so that will be my Suffolk 365 picture for today.

Never mind  in the end my trusty Tunein Radio App (it has like a gaddzillion channels)  picked up Radio Suffolk, but I only caught Scott’s newspaper reviews.  Then I made a quick trip via the same app to the World Service where Ed Sheeran was being interviewed.  This lad is currently doing amazingly well, having self promoted his tracks and being top of the downloads.  He is from Framlingham and his MySpace is worth a visit if you’ve not heard him before.

Illustration Friday – on not drawing

I really wish I could draw.  I admire the work of so many artists and now I am working in a school I love the idea of learning techniques as they are taught in schools these days; fantastic.  One of the nicest things about twitter and the web is that people who create work can quickly send links to all sorts of art.  I appreciate this is not the same as seeing things in the flesh. Looking closely at art from different perspectives and handling pieces can make such a difference; as can talking to the artists, so Open Studios can be greatly illuminating.  The web though offers one little gem – Illustration Friday, a theme is posted each week and artists submit their work. This week’s theme is ‘Pattern’, so I thought I would add this petite creation, generated using brushes on the i-phone.