Puglia, Italy by Train and farming the environment 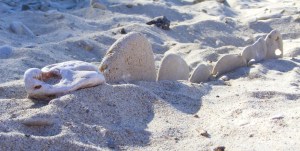 It is Bank Holiday Monday, the air is chill in Suffolk and the holiday to Puglia by train seems light years away.  A good time to create a few short posts about the trip – so how about:

This is the third train trip to Puglia; Wickham Market station was sunny when we left and 1,500 miles of train travel lay ahead.  All trains were on time to Paris and a lovely upgrade on the Eurostar meant a civilised lunch with wine to help the journey along.  A great new tip that helped this part of the journey was using the RER from Paris Nord to Paris Gare de Lyon and then walking to Paris Bercy.  It has become a ritual to stop at Cafe Chambertin and watch the heads emerging from the metro; but now with extra complacency from not fighting with all the steps.

All was looking good, until the lights on the boards at Bercy announced the expected arrival time for the night sleeper to Bologna.

So, a delay of one and a half hours predicted.  Still we had access to the lounge and met a couple who were on a Rotary golf tour in France, making their way to Italy and then returning to Australia in time for the elections.  Plenty to chat about.  When the train arrived not only was it late but none of the usual attendant services.  We had picked up that there may be a bit of politics going on in Southern Europe and Italy in particular about night trains.  I’m not sure if that is what happened, but things were certainly not as slick as they have been before.  Never mind, an hour and a half would still allow good time in the morning to catch the connection and of course there was a chance the train would make up time overnight.  So fully expecting to wake up with dawn somewhere near Bologna, there was no wake-up call or breakfast and it was a little surprising to wake to a light blood-orange dawn, spilling over the Northern lakes.

In the end the train was four hours late into Bologna, a whole two minutes after the Lecce connection, along with the booked seats, had departed.

Top tip here.  If you miss your train go to customer services and have your ticket stamped, at least the tickets were transferable to the next train, two hours later, but without booked seats.  ‘Stand and grow good’ I was taught as a child; six hours of standing I must be very good indeed.  The train was rammed, but the best of spirits as virtually everyone is in holiday mode.  Mostly Italians off to the south for their long break; a feisty old lady shouting about being 84 and needing a seat, which of course she was given.

Nothing can suppress for me the joy of watching the countryside change as smart northern towns give way to the polenta belt, then to grapes and unfettered blue skies.  The temperature steadily climbs, the countryside becomes browner where fields have been cleared.  Fields of sunflowers heads bowed and from Rimini on down the side of the boot there are open sea views, bodies browning, people standing and sitting in the sea – standing on a train or not, it is a great sight.  As the countryside converts to olive groves and fields of tomatoes and melons the other farming now is wind and sun.

Puglia has gone for wind and solar farming in a big way.  Not surprising as it has plenty of both and has an apparently interesting approach to planning.  The biggest problem for them is security; people keep stealing the photovoltaic panels.

We arrived late but not undaunted.  All credit to the people at e-bookers who dealt with my calls from the train to change the pick-up time for the car.  One more tip for anyone doing this journey; on the way back we found that the bus ‘A’ from Brindisi station does a loop to the airport and at 1.50 Euro is a lot better than 20 Euro for the taxi.

Greeted with wine and smiles by Debbie and Bob, all was right with the world for a relaxing two weeks at Casa Mare. 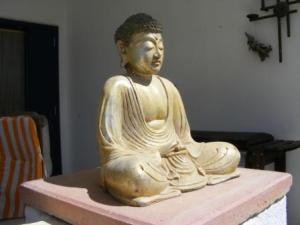 Ripple – Illustration Friday – Our relationship with the planet and its inhabitants 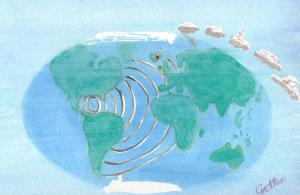 The subject for Illustration Friday this week is ‘ripple’. I have gone against the brief somewhat as the introductory e-mail says “It’s not about the politics or the corporation. It’s about the animals. It’s about not feeling helpless in the face of an overwhelming disaster.”

I am not necessarily feeling helpless but certainly feeling reflective about our relationship with the planet and its inhabitants. Perhaps the only way to turn  my thought processes around is to think that perhaps we can create ripples for good as well as for ill. I also try to remember that as well as the ripples we create, our planet throws us some of its own too, like Eyjafjallajokull, the Icelandic volcano, throwing its ash into the sky as if to defy our attempts to act like Daedalus and Icarus and fly.

One of my earliest memories of taking an interest in environmental issues was learning the poem To See the Rabbit by Alan Brownjohn.  Goodness knows what the final impact on wildlife will be of the current oil spill, as a planet inhabitants we are still learning, years after the Torrey Canyon disaster, about how we handle oil and how our planet reacts, responds and heals (or not) as a result.

Can we create ripples for good?  If so – how?

I entered the picture above at the Ripple Sketches website.  The idea is that for each picture posted people can put in a request, if they can prove they have donated $10 to one of the selected charities.  Bless her cotton socks (for I now know who it was) someone put in an offer for my little picture and it is now flying its way to Arizona.  Follow the link to the Ripple Sketches website and see other people’s ideas based on the theme.

Black, Glossy and Less Portable than an iPhone – My Latest Love

OK, ok, it’s not an iPad but it is solar water heating and it works.  The Greener Fram group created a bulk purchase arrangement with East Green Energy, based in Kelsale.  Our house is reasonably well positioned to take advantage of the sun, but with a few niggles.  We have enormous oak trees which over shadow the house, cutting them down would not be an option but we will be doing some work to harvest a few branches for firewood and increase the light into the garden generally.  At least oak trees open later in the year than most.  We are not fully south-facing; however the early morning sun is able to hit the tubes over the top of next door’s roof, so actually this seems a slight advantage.  Even this damp, overcast early morning there is already 20 degrees being created within the collector.  My latest obsession is checking the monitoring panel where you can read the roof, top of tank and bottom of tank temperatures, we have hit over 50 degrees in strong sun. We did have a new hot water tank fitted, with three heat sources the solar, immersion and a feed from the back boiler in the winter months; putting the harvested branches to good use later.

East Green were a great company to work with, relaxed and a parting comment of  ‘any problems at all, or if there is anything you need to know or don’t understand just get in touch; any time’.  There’s not much more you could want really, is there.

East Green are at the Suffolk Show today and tomorrow –

Pop in and say hello to Robbie

Been at home today – always a mistake; too much time for reflection as the pile of tissues mounts at my side. Bit of a personal challenge this one, self audit looking at how green we are in the lead up to Christmas, as I’ve asked myself the questions I will be avoiding the difficult ones.

Clearly I should start with fabric hankies and a copper to boil them in after use!

OK it’s not perfect; it is a fairly solid start though. To everyone on my Green & Gardens Twitter list you are invited to the #12DCP and of course anyone else who would like to join in – Twelve days of Christmas party, a virtual party, open to everyone. Call back during the 12 days for all sorts of nonsense. If you are coming, what ‘green’ thing will you bring? Also choose some music for the #12DCP playlist on Spotify – I will see if I can also blip the tracks for non-spotify users.

Spotify playlist for this post is on a different note. – Audit of harlequin ladybirds on a window frame – Thanks to @flashmaggie who made me aware of this in her post.